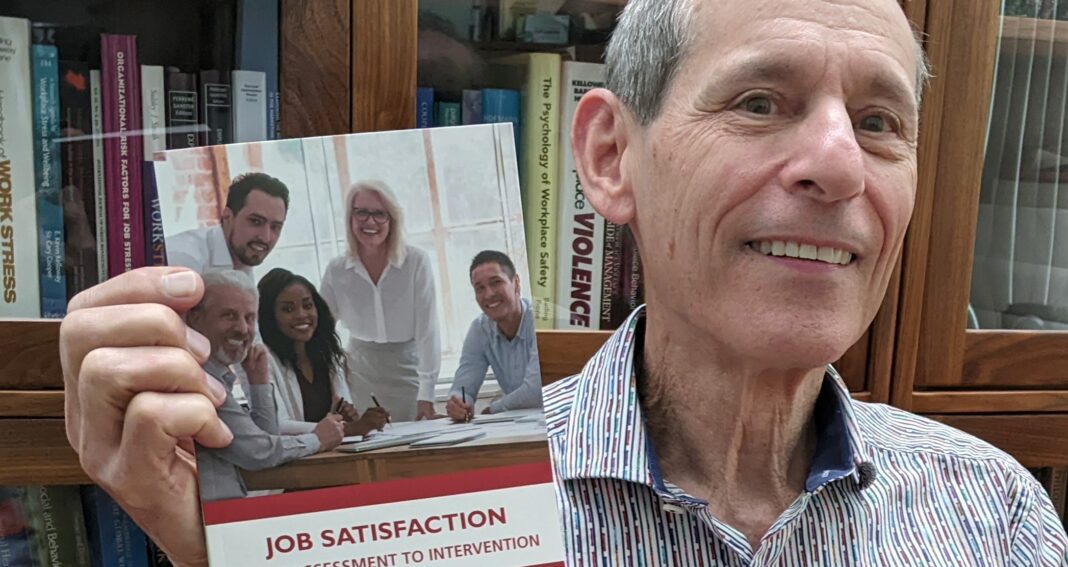 Job satisfaction has a long history of interest by both academics and practitioners going back to the 1930s when Robert Hoppock published the first tool to assess it. My personal job satisfaction journey began not long after I completed industrial-organizational (I-O) psychology graduate school in the middle 1970s when I read the book Work and Well-Being by Peter Warr and Toby Wall. This book introduced me to the idea that we could study the impact of jobs on worker health and well-being. In the 1970s, to an I-O psychologist well-being meant job satisfaction, so that’s where I started, but far from where I ended.

My early well-being work connected job satisfaction to physical health symptoms. The connection is well known today, but not so much in the mid-70s. Since the two main job satisfaction scales—the JDI and MSQ—was proprietary and could not be used for free, I decided to develop my own. I created the 9-facet Job Satisfaction Survey (JSS) to tap the major aspects of satisfaction, such as coworkers, nature of tasks, pay, and supervision. I was not successful at publishing the early work on physical symptoms because it was too out-of-touch for the field at the time. I recall reviewers at Journal of Applied Psychology noting that the topic did not belong in I-O. This sentiment was shared two decades later when an anonymous reviewer commented that a chapter on worker health and safety did not belong in my I-O textbook. Job satisfaction was okay as a topic at that time, but physical health was a step too far. What I retained from my early work was the JSS.

In 1977 I left academia to take a series of positions as a practitioner. I continued to develop and use the JSS, but in practice rather than academic publication. I used the scale at my own organizations and in consulting. Most of that work was in the mental health and social service industries, so that became the focus of the scale’s development and refinement. The practitioner years were significant in my personal job satisfaction journey as I got to be a participant observer as an organizational insider rather than external researcher. My field of I-O and business management has all but lost that perspective as few academic publications are by practitioners.

When I returned to academia in the early 80s, my research focus was even more solidly on worker health and well-being, and job satisfaction was a constant companion. Colleagues, students, and I conducted studies that linked job satisfaction to many different topics, some old and some new. Over my first dozen years as an I-O professor these included:

Job satisfaction has been a default variable in most of my research on employees. Having investigated it in many contexts, it seemed appropriate to write a book on the topic. A Sage Publications book series Advanced Topics in Organizational Behavior was the perfect vehicle. In 1997, Job Satisfaction: Application, Assessment, Causes, and Consequences was published. It has been cited nearly 11,000 times, I think in large part because it includes a copy of the JSS that can be used free of charge for noncommercial purposes. That scale has been popular, and almost every day I receive a request from a student or researcher for permission to use it.

After 25 years Job Satisfaction is dated, as many new topics have been linked to job satisfaction. For this reason, I decided in 2020 to write an updated book, Job Satisfaction: From Assessment to Intervention. This book, published last month, contains many of the features of the original, such as the JSS, but it includes many new topics, as well as updates to old topics. It also is tied to my website where people can find job satisfaction resources, such as links to assessments and my blog.

Despite its age, job satisfaction continues to be a major topic of concern for practitioners and academics with articles spread across many disciplines beyond I-O and management. I think it has had such a long history of interest among academic researchers because it is such an important part of people’s experience of work. Whether we like or hate our jobs affects our entire lives including our behavior at work and at home, our health, and how we view the world. What makes it an exciting topic for me is that it is of more than academic interest, as organizations strive to create environments where people can have satisfying work lives that allow them to thrive.